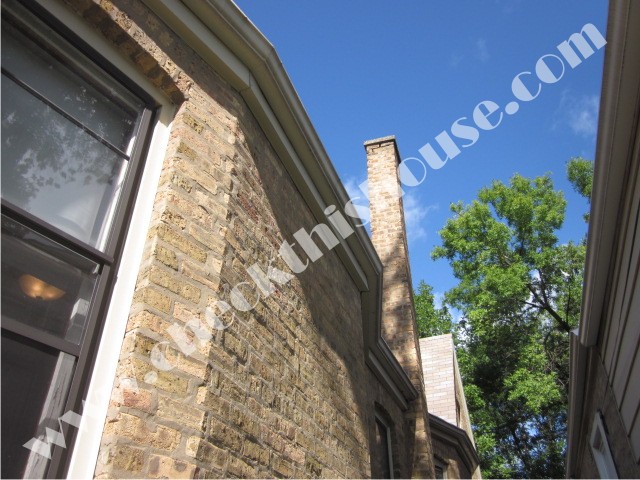 No climbing on and leaning the ladder against your chimney stack while performing chimney inspection!

For a brick chimney inspection (it would also apply to stone and cinder block) – check the condition of mortar lines between the bricks, and the bricks themselves. Heavily deteriorated / missing mortar qualifies chimney for tuck-pointing.

Sometimes, portions of bricks and significant amounts of mortar are missing; this creates holes in the chimney walls and partial rebuilding might be required.

The same applies to a leaning chimney – unfortunately brick isn’t a flexible type of material, and a leaning chimney, sometimes separating from the house structure, would most likely require partial or complete rebuilding. Problems with the chimney foundations or with the way it was designed from the beginning (old, flue-less designs) might cause vertical cracks – these are dangerous and might allow Carbon Monoxide seepage into the living area, therefore, they require professional evaluation.

TV antennas attached to the chimney are often responsible for cracked mortar joints and may eventually cause the chimney to lean (especially on tall structures). Wind causes the antenna and its mast to vibrate, loosing up mortar joints, and creating cracks – it is probably better to secure it properly to the roof using a tripod type stand, using silicon under the brackets and on top of the screws (make sure that they are long enough to penetrate shingles and decking).

This next part may not be visible from the ground, so either hire somebody to check it for you, or if the roof is easily accessible and you feel absolutely comfortable doing it yourself, follow me:

Flashing on masonry chimneys is usually metal (copper, galvanized steel, aluminum), it should be sealed along the chimney walls and properly installed under the shingles – something called “step flashing” is usually required on a pitched roof.

Roofing cement is not a proper type of a flashing, but is often used when more than one layer of shingles is installed or the old flashing starts leaking. It might serve as a temporary fix but it will eventually crack and should be replaced with a permanent type of flashing as soon as possible.

Chimney crown is designed to seal the chimney wall and to shed rainwater; sometimes it is a block of concrete, sandstone, or bricks simply sealed with mortar around the chimney flue. This part often deteriorates, cracks, or falls apart – small cracks should be sealed with rubberized compound (silicone, good quality exterior rated caulking) or they might expand during the winter if  water gets into them and freezes.

If large sections are missing or mortar has heavily deteriorated and opened gaps around the flue (exhaust pipe), it requires professional servicing.

Metal crowns (or better known as termination caps) may be corroded, have sunken, and now hold water – check for holes and seal around the flue pipe penetration. If you spot any gaps or holes in a metal crown of the chimney, chances are, its interior frame has been already compromised as well and requires servicing.

Chimney rain cap and screen – install it if it’s missing. If it’s installed; it should not be damaged / smashed / collapsed / blocking the flue. There should be no bird nest around it or inside of it / some chimneys and their rain cap designs permit easy penetration of birds and sometimes rodents.

If your chimney has a cleanout at the base, you can use a flashlight and a small mirror to look inside – I’ve seen many dead birds, beehives, all kinds of debris, and one, very alive opossum – that’s one of the reasons to have a cap installed (screen recommended too).

Look for corrosion, holes, and loose parts on a metal chimney; rain cap brackets sometimes corrode and cause the cap to collapse and block the flue). Some metal chimneys come as one piece and any damaged parts would require the entire chimney to be replaced (usually applies to the sections sitting on top of the roof and posing as a brick chimney / square box surrounding flue pipe).

Asbestos / transite pipe chimney looks like a cement (grey color / unless painted) pipe, usually visible in the attic area or above the furnace, but may also have an exposed section penetrating the roof. If it is intact – no damage, cracks, deterioration … then itʼs fine (theoretically).

However, people are not happy with asbestos on the premises, even if it doesn’t require immediate servicing, because in case it becomes a problem, professional removal and disposal is quite expensive. So … take your chances. If it is damaged and reported by the inspector, it will most likely become an issue.

Please follow this link – chimney flue – to further explore it.

You’ll be able to easily discover many problems by following the above tips while performing your chimney inspection, just be careful!

HVAC Guide: How to Fix A Leaking Air Conditioner

7 Signs that Your HVAC Control Board Needs Troubleshooting