Don't forget to take care of the house brick chimney, even if your furnace, water heater or fireplace doesn't require it any more! 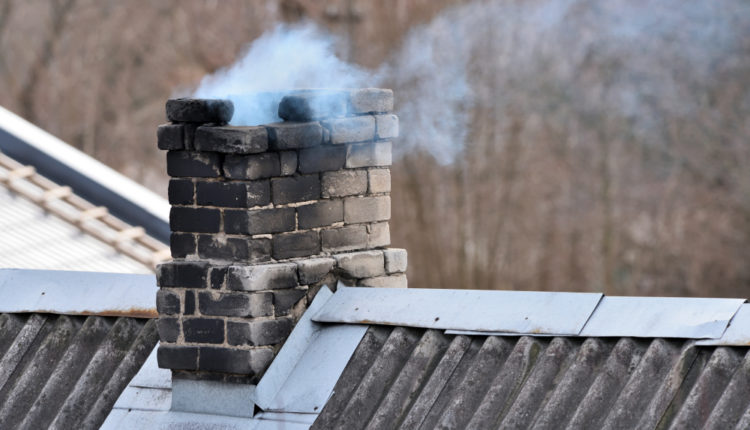 House brick chimney is one of the most important, and at the same time neglected components of our homes, and I think… for a very simple reason; because we don’t understand them, and they are not blocking our way to the kitchen or bathroom, we just take them for granted and forget about them… just like many other things. 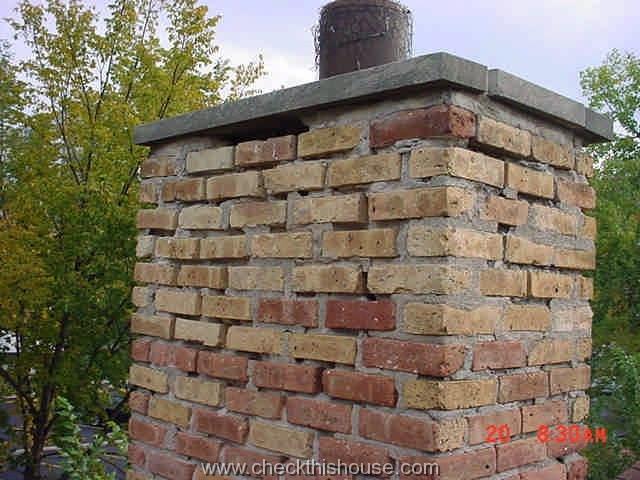 Because majority of problems I’ve encountered during inspections have been associated with older, usually masonry / brick chimneys, first section will cover this particular type. 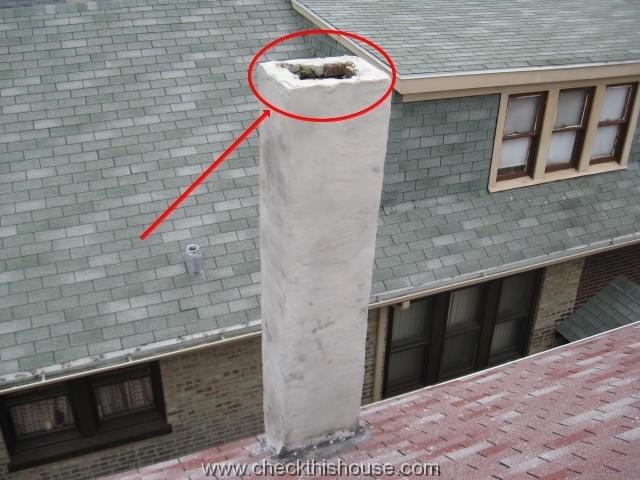 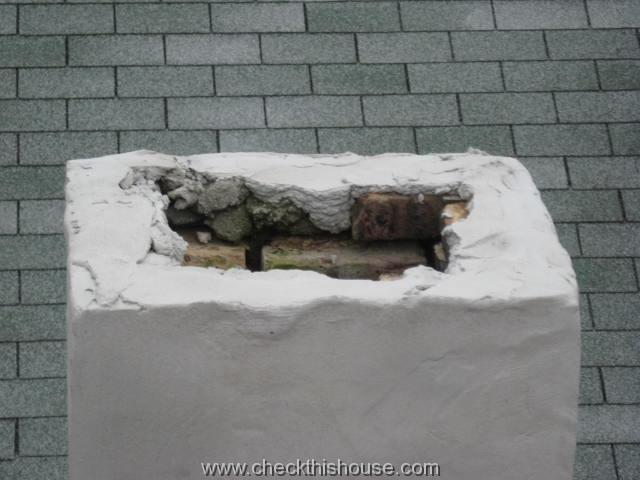 Huge number of the Chicago-land properties have been equipped with brick chimneys (I’m pretty sure that also applies to other parts of US), and many of those are dating all the way back to the late 1800 and early 1900. With properties exterior maintenance and improvements, brick chimney walls often received nice dressing, or maybe not as nice patches of various sources, just to keep them standing and to avoid costly rebuilding process.

Chimney Safety Institute of America reported in 1992 that “all unlined chimneys, irrespective of fuel used, are very liable to become defective through disintegration of the mortar joints.” 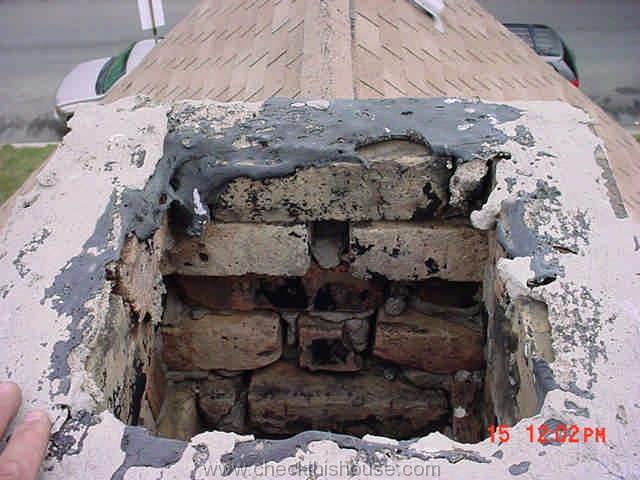 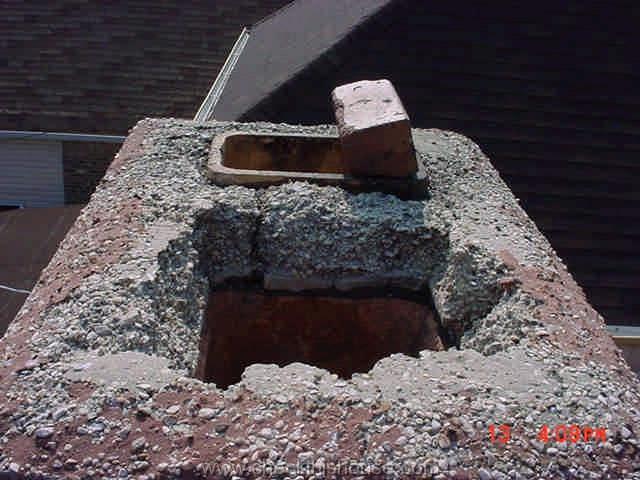 Deterioration of mortar joints and bricks is a natural, unavoidable process. However, proper maintenance, and replacement of mortar whenever is needed and necessary, protects bricks surface, and prevents, or at least slows spalling / delamination. 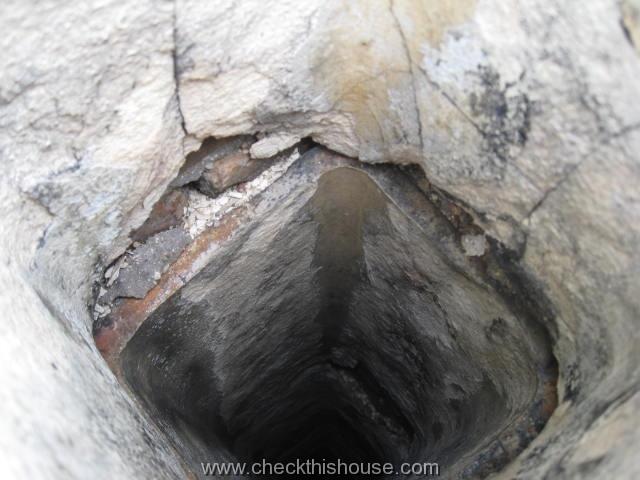 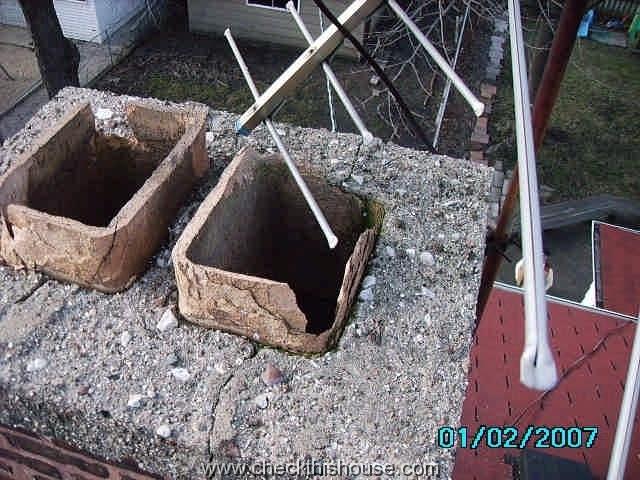 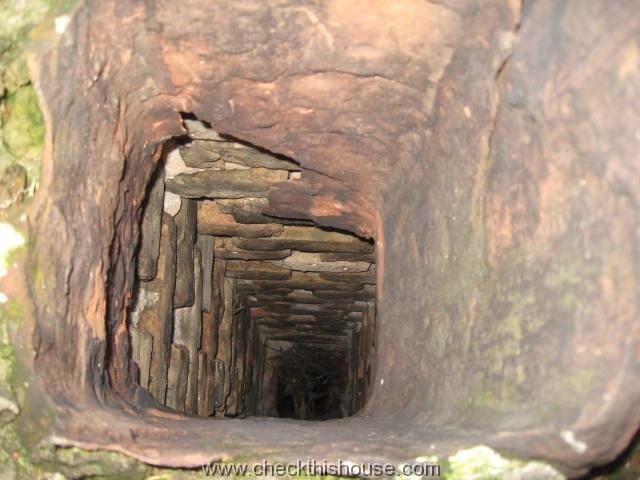 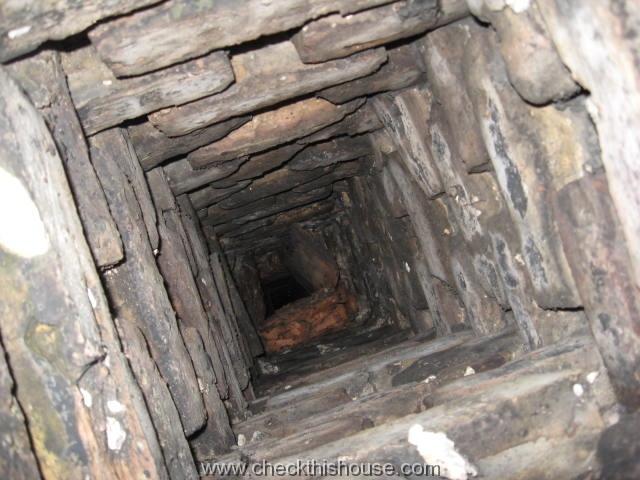 Notice on the pictures showing brick chimney interior missing bricks and mortar, partially missing liner sections. All that material has naturally fallen inside the brick chimney flue, and could be blocking it, creating extremely hazardous conditions – with blocked venting, CO (Carbon Monoxide) might contaminate your house air. 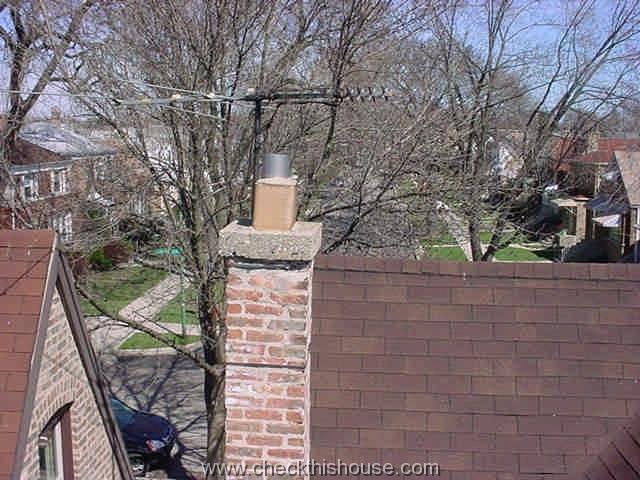 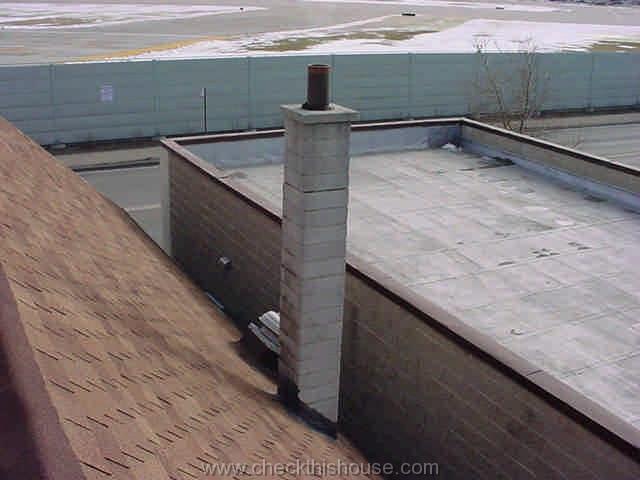 I wouldn’t suggest you going up on the roof unless you feel absolutely comfortable with doing it! Under no circumstances trying to claim up the brick chimney – don’t ever attempt to lean the ladder against it!!!, leave examination of a inaccessible brick chimney to the professionals! 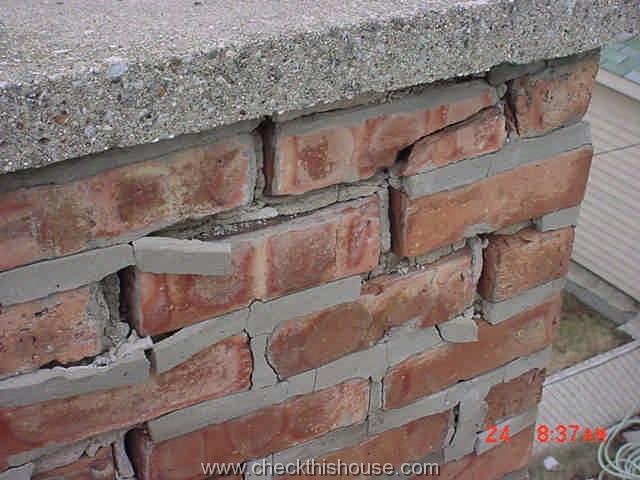 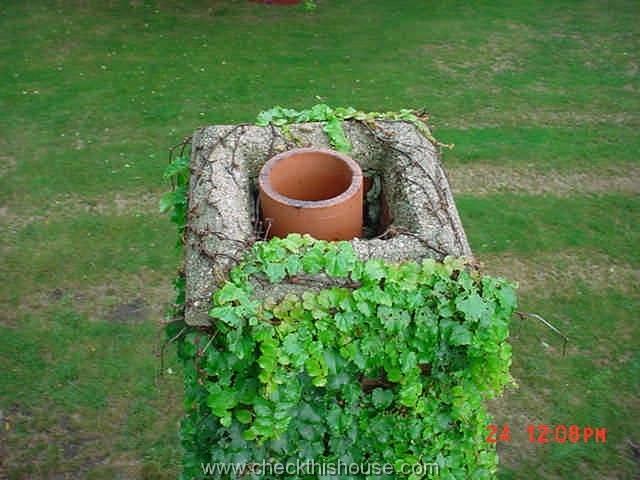 There are a few simple steps, you can take to get some basic idea about the condition of your brick chimney:

1. Check the house brick chimney from exterior, look for any deteriorated areas, missing mortar / gaps or holes between the bricks, separation from building structure (side chimney with 3 exposed walls / one shared with the building), leaning

2. Step further away from the building, so you can see upper section of the chimney, you should be able to tell if top has a crown, or if there’s a flue pipe / cap installed. Sometimes, the flue pipe might be even / flush with chimney crown, or have only small piece installed on top of the chimney to support the cap… if you can only see the edge of the last, top layer of bricks, get a professional because your brick chimney might look just like one from the pictures in this paragraph. 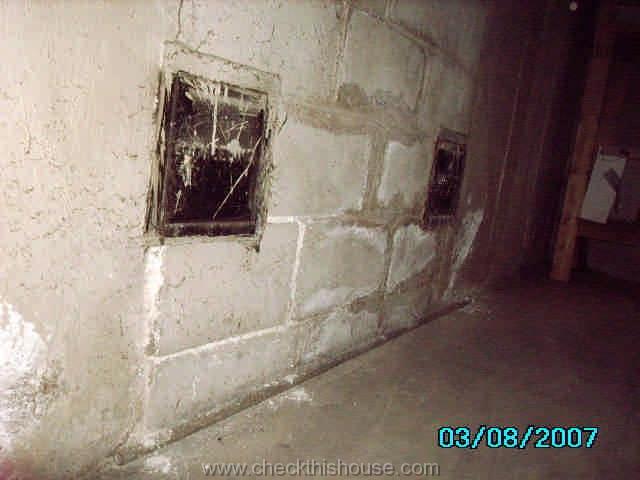 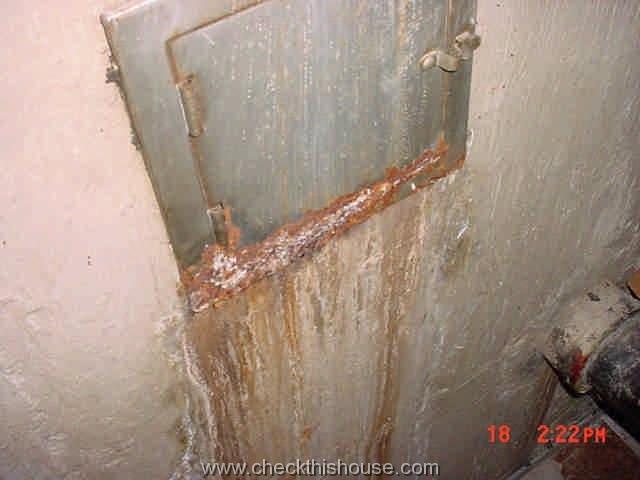 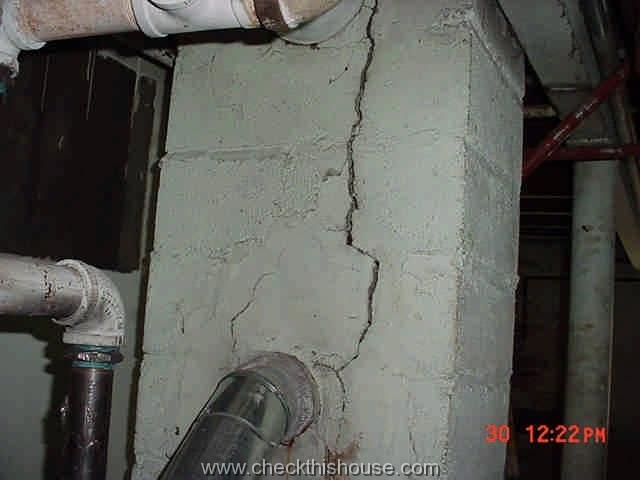 3. If you have access to the base section of the house brick chimney (in the basement, crawlspace, or sometimes house exterior), look for a small metal door, it might be heavily corroded, but if you manage to open it, get a powerful flashlight and a mirror.

You should be able to see at least part of the brick chimney interior, up to the appliance vent pipes penetration, and hopefully determine if it is lined – don’t be surprised, if after opening of the door all you can see is bricks, mortar, clay tile pieces, carefully pull it all out if possible to get a better look at interior (use gloves or some tool to remove debris to avoid injury). You may also notice chimney wall cracks, which pose serious hazard, especially if there’s no liner installed behind the bricks, or if existing liner is also cracked.

Water leaking from under the chimney clean-out door, or at the brick chimney base usually has 3 sources: 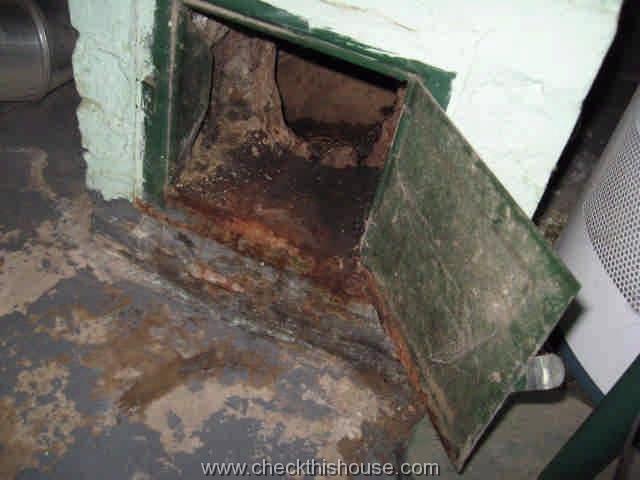 – missing chimney crown and / or cap 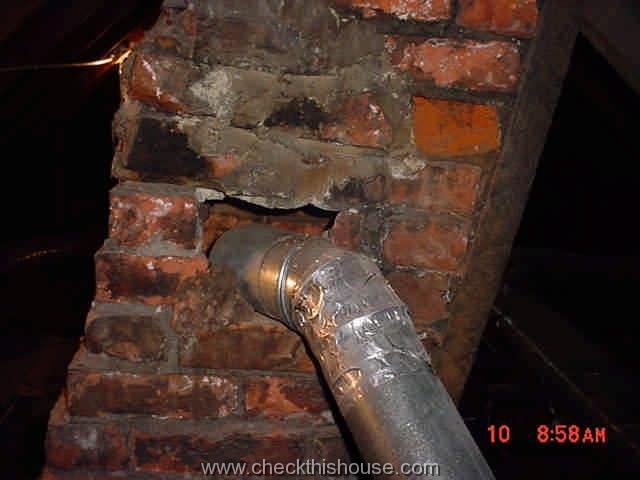 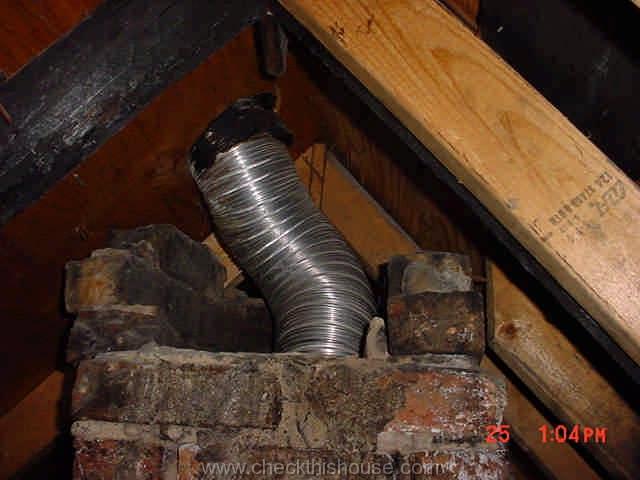 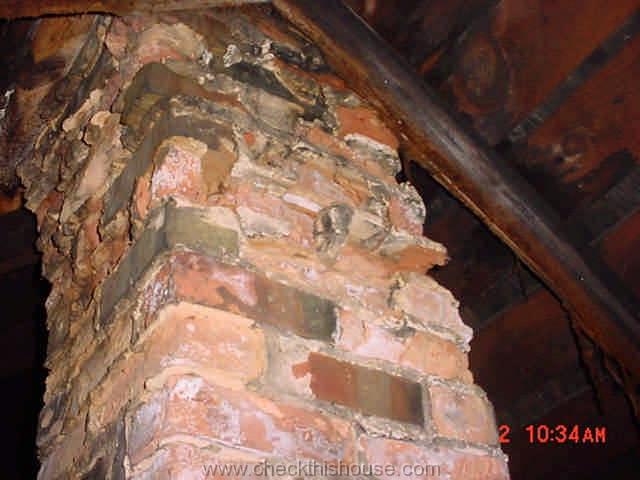 4. If section of your house brick chimney is accessible from the attic, use it to your advantage, but be careful in the attic, many have no floor boards, you have to step on ceiling joists, sometimes covered with insulation – drywall or plaster will not support you!.

You might find missing chimney bricks, holes, improperly connected appliance vent pipes, cracked or just falling apart chimney. You might also see a chimney built on an angle (this is called corbelled brick chimney), which is normal and as long as it’s in a good condition (look for displaced bricks, cracks, missing mortar), there’s nothing to worry about – it was designed this way for purely aesthetic reasons, to come out at the center of the roof. However, installing a new liner in corbelled chimney might be difficult.

If you’re planing furnace and water heater replacement (or maybe you’ve already replaced it), or just one of those appliances, have your brick chimney inspected, make sure that its flue dimensions comply with new appliance requirements, and if necessary install a new liner. This is critical when replacing one of the appliances using chimney venting with a high efficiency appliance.

For example, you used to have a furnace and water heater venting through an old brick chimney lined with a large diameter clay liner. Even though an older appliance’s efficiency was lower, they wasted more fuel in heating process, discharging significant amount of hot exhaust gases through the chimney, elevating chimney flue temperature to the level which guaranteed proper draft. 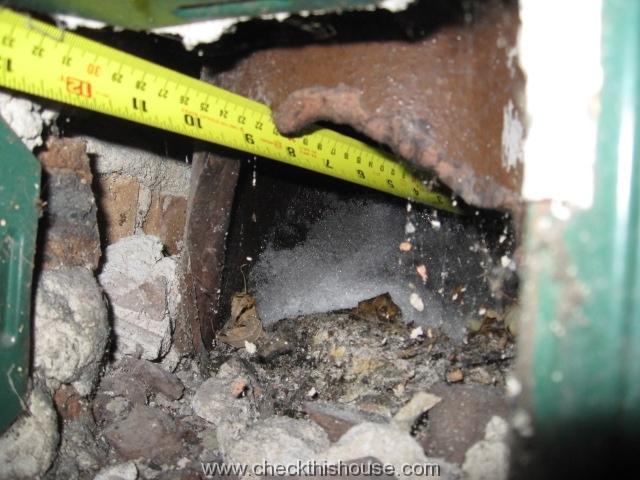 If you’ve eliminated chimney vented furnace / installed new high efficiency furnace using PVC pipe for venting instead of a chimney, and now have only water heater hooked up to that old, liner-less or with oversized liner brick chimney, you’re creating a pretty hazardous situation.

Exhaust gases from the water heater will not be hot enough to raise brick chimney’s interior temperature to such level which would guarantee adequate draft force. During cold months, gas exhaust flow rate through the chimney might be reduced to the point, where poisonous gases return into the house. The conclusion is a very simple one –

Never vent appliances (also applies to fireplaces) into an oversized chimney – if there’s any doubt – have it inspected by a professional, and check this chimney flue sizing guide!

Do not allow small house brick chimney problems to become a disaster!

House Water Heater Vent Pipe Tips & How To Do It Right

Private: How To Clean Your HVAC System: 4 Useful Tips

Why Furnace Repair is Important